Tweening position and color for glow effect in Godot

Create a new scene e.g. tweening.tscn, and pull in a card.tscn node and a Button. The card is going to represent the position of our deck of cards so we can set it's TextureRect.texture to the back card png image. Attach a script on the root node e.g. tweening.gd, extending Node2D and preloading the textures we'll need when we create a new card (dealt from the deck), as well as getting a ref to other nodes we'll be using. The x_offset is how much space we'll be leaving between each successively dealt card, and the Node2D named DealPosition is the position we'll be dealing the first card to (set this at some reasonable position on the canvas):

The CardTween node is just a custom script I made that extends Tween. Add a card_tween.gd script with this for now:

This makes it a little easier to move a Card and keeps things consistent (i.e. we can use the same function to move all cards).

Anyway, back to the tweening.gd script, we can create a new function to handle clicking the "Deal" button:

We disable the button and deal 3 cards on click, but we still need to map the signal to this function - you can do that by selecting the Button node and going to the Node tab in the inspector and then doing the mapping for the pressed signal. 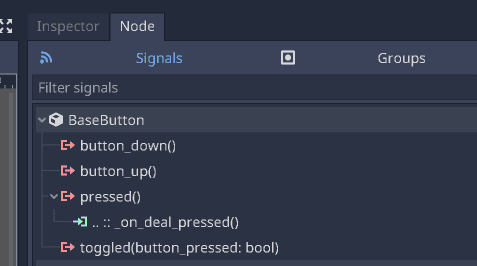 The deal_cards function takes a number of cards to deal; creates a card at the deck's position; tweens the card i.e. moves it to the target position; and calls itself with one less card to deal, obviously breaking the recursion when there's no more cards to deal:

Ignore select_card_by_index for now as that's for when we want to highlight the "selected" card via a glow effect (we'll do this later).

What's important here is the Card's starting position. This needs to be the Deck's rect_global_position because that's where I'd like the animation to start from, however, I'm adding the new Cards as children of DealPosition. This is because I want to group them under that parent node (I also know that I'll be using DealPosition exclusively to parent dealt cards so I can rely on it's children's size being the number of cards currently dealt and e.g. not have to stay storing that info myself in an array - and updating manually everytime this count changes). I don't want to use Deck for this as Deck can have other child nodes and indeed it already does if you're using the card.tscn for it as that has an AnimationPlayer.

Now, since I add new cards to the DealPosition, their initial global_rect_position is going to be the DealPosition's global_position, so when I add a card, I also change it's position to that of the deck's and I "abstract" this in the function add_card_to_tree.

Starting the tween from the deck will avoid any weird flickering at the end of the animation (i.e. in my experience just setting the tween's start and end position isn't enough. The object you're tweening needs to be at the start position for best results before starting the tween).

After tweening (moving) the card, I'm waiting for the movement to finish before dealing another one but you could use a timer here and e.g. start dealing the next card before the previous one has finished moving to it's target position.

Selecting a card with a glow effect

To get the glow effect working, we first add a WorldEnvironment node to the scene; (1) create an "Environment"; (2) change the Background.Mode to Canvas; (3) enable Glow; (4) optionally change Blend Mode to Additive for more glow and maybe tweak the Strength: 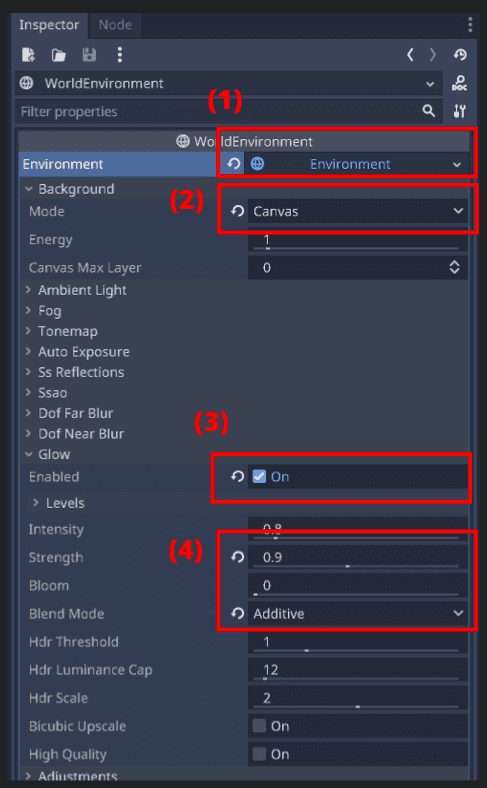 At this point, we are able to change a texture's raw value for a color channel to over 1 to get a glow effect on it. All that's left is to animate this color change over time to different values on the correct card and remove and apply to another card on player input.

To do this, we'll get started with the select_card_by_index function which is called with an argument of 0 when the cards are done being dealt:

The idea here is to try to get the node at the given index using the DealPosition (since that's where we're keeping the cards). If this operation gives us a null, then we want to leave the newly added script variable of selected_card to whatever it was prior to this function call - and if the retrieved card is the same as the one currently selected, then we'll just return. If it's a new card, we want to stop the glowing on the selected card and start glowing the new one.

To stop the glow, I'm removing the existing tweens on the given Card and changing it's modulate (color) to the glow_off_color. modulate effects all child nodes of Card as opposed to self_modulate which only effects the Card. For our purposes here, they are the same.

With regards to glowing, as seen from the code below, I'm basically changing the color (modulate) from "high" to "low" or vice versa by choosing a raw color value which exceeds 1 which will give us the glow effect thanks to the WorldEnvironment changes we made: 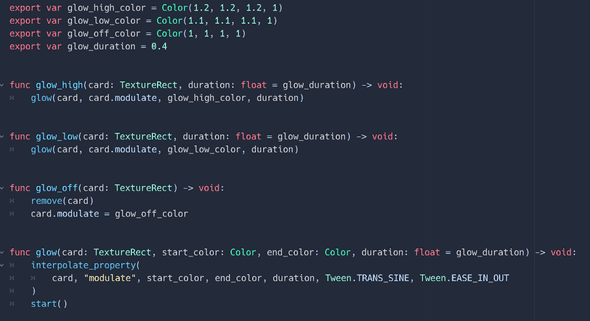 Back to where we left off after selecting a card; at the end of select_card_by_index, we call start_glow_card which basically just starts glowing at a high value and sets a flag to keep track of this:

When the tween completes (something we have yet to hook up), _on_tween_completed kicks in. However, we're tweening modulate and position with the same Tween node so we need to check using the key NodePath that this callback is handling a completion of a color change animation. If it is, we just glow_card again. glow_card triggers the correct glow (high or low) based on the flag and flips the flag. This ensures that the glowing keeps going.

Finally, we can add a _input function to handle user input of "ui_right" to select the card to the right of the currently selected one (move right) and loop back; "ui_left" to move left and loop back; and "ui_select" (space bar key) to just flip the card - a feature we added in the: "Card flipping" post: