Make 2 cards. One flippable via a button close-by; and another card that can itslef be clicked to flip.

The first scene, res://scenes/card/card.tscn, will have a TextureRect (named "Node2D" below, but it's actually of type TextureRect) with an AnimationPlayer. The Control.Rect.Size will have an x of 170 and a y of 245. The Pivot Offset is set at half the x, at 85. This will be important when we animate the rect_scale.x. If we don't change it, the animation will happen from the left side of the card. 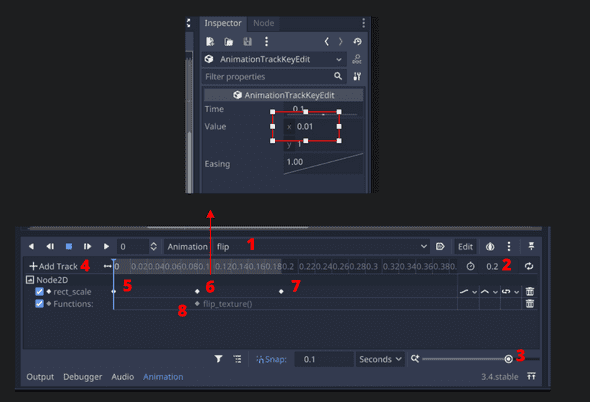 Now add a script on the root TextureRect node:

We get a reference to the AnimationPlayer and store it in ap since we'll need that soon enough.

is_face_up is used to track whether or not the card is facing up.

front_texture and back_texture will be the 2 different images the TextureRect can take. A TextureRect has a texture property. Since we are extends TextureRect, we have access to it and in set_texture (which we are overriding from the parent), we flip the texture based on is_face_up if we pass in no argument.

Next we add a way to flip_texture (which is what will be attached to the 0.1 time on the AnimationPlayer), and a flip function which can be used to start the animation programmatically - such that calling flip will call flip_texture 0.1 seconds later:

Add a new root node e.g. Node2D, and "Instance child scene" to instanciate a node from the res://scenes/card/card.tscn scene, and name it Club10. 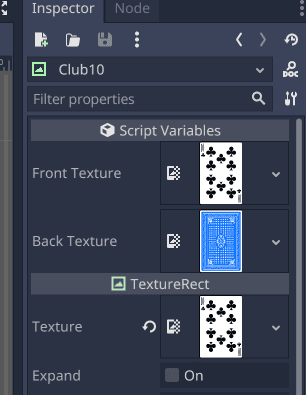 Setting the TextureRect texture is just so we can see it in the Godot editor. When executed, the Front Texture and Back Texture will take effect.

Next add a button somewhere and give it some text like "Flip" (feel free to increase its size). We'll need to use the pressed() signal and attach it to a function in the tmp scene's root node, which doesn't have a script yet, so add one for it:

Pretty straight-forward; we're flipping the card when the button is pressed.

Next we'll create a new scene based on the card.tscn one. From Godot's top menubar: Scene -> New Inherited Scene; and choose card.tscn.

Add a Button node as a sibling to the AnimationPlayer and set its size equal to the TextureRect's i.e. x of 170 and y of 245. Also, we don't want the button to be visible so set it's CanvasItem -> Visibility -> Modulate -> alpha to 0. We don't want to tick the Visiblie off as that would make it unclickable.

That's all we need to do here; we'll attach the pressed signal elsewhere.

Adding a clickableCard instance to the tmp scene

At this point, you can go back to tmp.tscn, add a clickableCard scene instance and give it a front and back texture. Add the following to tmp.gd script:

Note that I named the clickableCard node instance as "Diamond10" and on tmp scene is ready, I'm attaching that instance's Button pressed signal to this script's _on_diamond10_pressed function.

Running the tmp scene should allow you to click the button to flip one card, and click the other card to flip itself.